All are welcome: Linux, macOS and Windows.
Development Languages supported in this workshop:

Delivering working code is the goal of software developement. Undelivered code is worthless; we need to get bits into production. It is sometimes easy to lose sight of this given the distractions of new technologies, the latest methodologies, changing frameworks, etc. In the end, however, it’s about working code running in production. In this workshop we’ll start with a fresh, new OpenShift cluster and finish with an automated CI/CD system — Tekton with OpenShift Pipelines — running in that cluster. Here, in one place: An end-to-end story.

As an optional step, we will then move forward, using the automated CI/CD system as we update and push source code back to the git repository. This will complete the cycle of creating source code, updating source code, and updating the compiled bits that are running in an OpenShift pod.

The engine for this is OpenShift Pipelines. OpenShift Pipelines relies on Tekton, the container-based build component of Knative, and runs in pods. Because each step runs in it’s own pod, the benefits include scaling and the ability to run steps in parallel.

This example will give you the choice of using code written in Go, Node.js, C#, or Python. A simple RESTful service, Quote Of The Day, will return quotes via an HTTP GET request.

Here’s an example of a cURL command against the service:
curl http://qotd-pipelines-tutorial.apps.ci-ln-d5zj8tb-72292.origin-ci-int-gce.dev.rhcloud.com/quotes/random

{"id":2,"quotation":"Life is really simple, but we insist on making it complicated.","author":"Confucius"}

Prerequisite #1: A terminal session on your PC

You’ll need to be able to run commands at the command line on your PC. Note that this workshop works with Linux and macOS (bash or PowerShell) and Windows (PowerShell). Where any differences between bash and PowerShell occur in this workshop, commands for both environments will be supplied.

Yes and that was not a typo: PowerShell runs on Linux and macOS.

An OpenShift 4.3 (or newer) cluster is necessary to run this workshop. Options include:

Visit the OpenShift 4 web site at try.openshift.com for instructions for your selected cloud-based infrastructure.

The Tekton CLI, tkn, is necessary. Note that this utility is built for your operating system of choice.

To install tkn, visit the Tekton Pipelines cli github repo and follow the instructions for your operating system.

The OpenShift CLI, oc, is necessary. Note that this utility is built for your operating system of choice.

To install oc, visit the OpenShift version 4 clients download page and download the client for your operating. You’ll need to decompress the downloaded file and make sure the resulting executable bits are in your system PATH variable.

You’ll need the Git tool installed on your machine. You can find the instructions at www.git-scm.com.

You will need the Git repo associated with this workshop.

After cloning this repo, move into the directory where it is located (typically “openshift-pipelines-tutorial”). This will be the home directory for the remainder of this workshop.

This is because all the build and deploy work is done in our OpenShift cluster. In fact, once the pipeline is built, you could do all your development work using CodeReady Workspaces on, say, a Chromebook or tablet (such as an iPad).

The following list shows the six steps that will be used to get our CI/CD pipeline up and running:

Because OpenShift is built on Kubernetes, it supports the concept of "Operators", or pre-built Customer Resource Descriptions (CRD) that include the (sometimes many) pieces needed to invoke and sustain a solution. In other words, a Kubernetes Operator can be used to start and maintain a complex solution. For example, there is a Kubernetes Operator that allows you to very easily get an instance of MongoDB running in your OpenShift cluster. There are others: Eclipse Che, Elasticsearch, Kafka, and scores more. To invoke an operator *may* involve many steps. You install the Operator and the create a Subscription. In some cases, such as Kafka, you then invoke the API you want. For example, Kafka Connect or Kafka Topic. For OpenShift Pipelines, one quick command will give us all we need.

Before any work can begin, you must be logged into your OpenShift cluster with cluster-admin rights. Use the oc login command to do this. For example, on my Fedora 32 machine using CRC:

Create an OpenShift project in which we’ll be working.

When it comes to installing the OpenShift Pipelines Operator, you have two choices: Use the web UI dashboard or use the command line. For this workshop, we’ll be using the cluster dashboard.

After selecting the OperatorHub option from the menu on the left, type in the word “pipelines” to filter the results. You’ll see the Red Hat OpenShift Pipelines operator card. 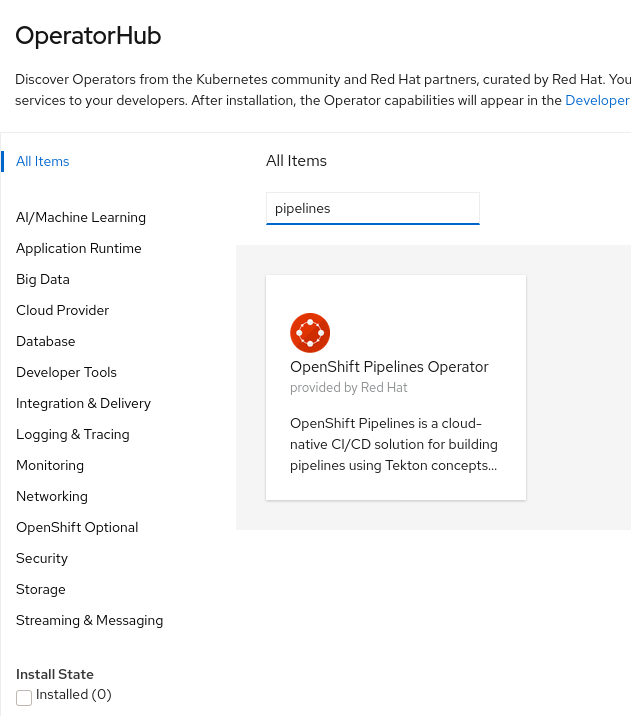 When you click on the card, you will be prompted to start the installation process: 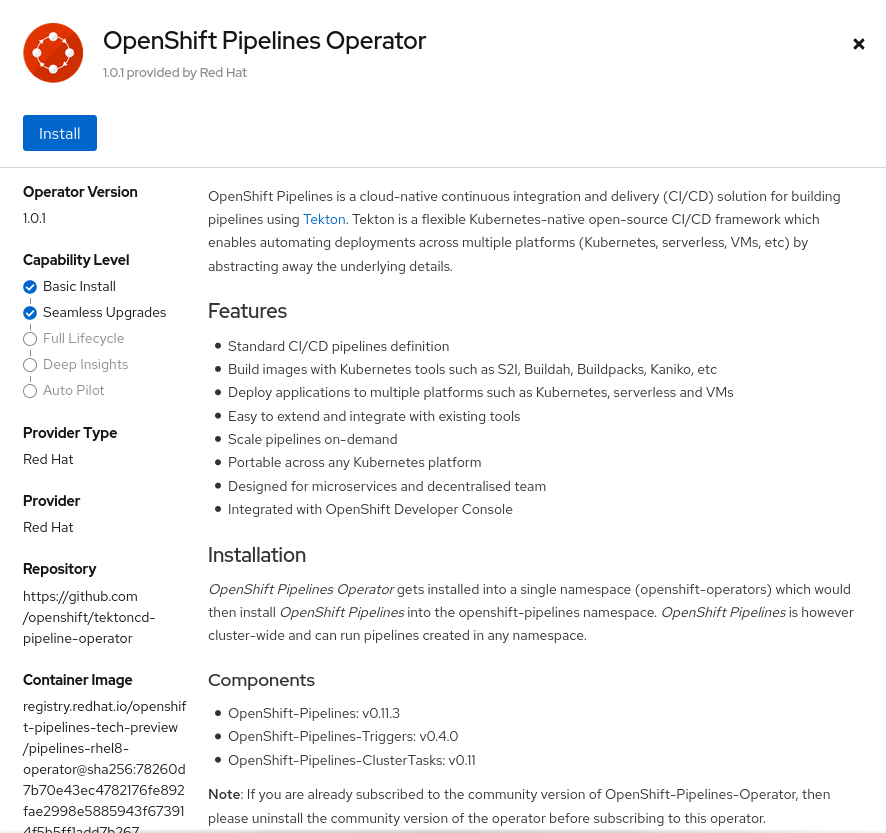 After you click the Install button, you will be prompted to provide details for the installation. Use the default values and click Install. The installation will execute: 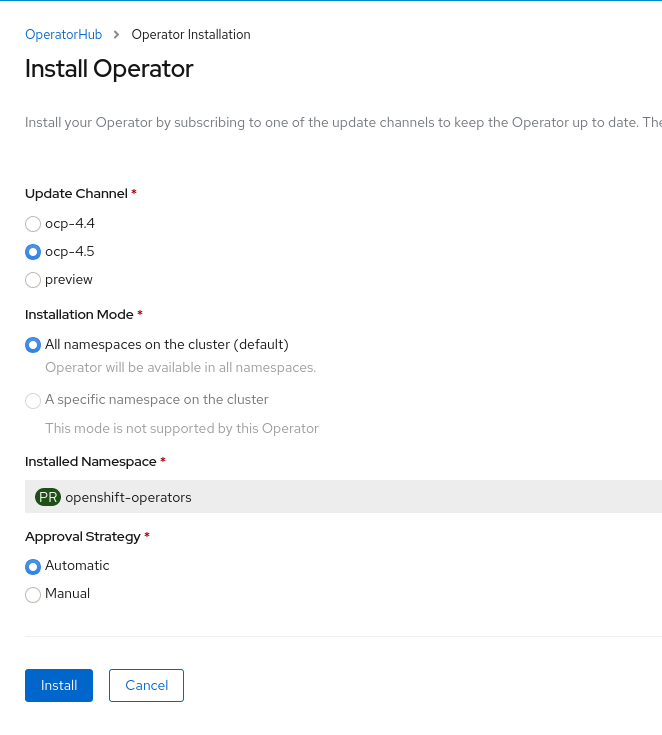 The installation is complete when the status shows “Succeeded”:

The next step is to create the pipeline we want to use. The following pipeline is discussed following this image, which is in the file “qotd-pipeline.yaml” in the repository:

This is the name assigned to the pipeline. This name does not need to match the name of the file used to create this pipeline. In fact, in this particular example, the file is named “qotd-pipeline.yaml” while the pipeline, inside of your OpenShift cluster, is named “qotd-build-and-deploy”. It is probably a good idea to make the names match; this is a management issue.

This pipeline uses two resources: A git repo as the input and a Linux container as the output. That is to say, it will clone a git repo and build an image.

Note that the resource names are not the same thing as the resource values. In our example, the git repo resource name is “qotd-git”, but that has no value. Later, when we create this resource, we’ll give it a value, i.e. a URL that points to the repo.

This section declares what is done and in what order.

Line 13 is a name that we’ve assigned; it could just as well be called ‘foo’. The “taskRef”, in lines 14 through 16, is where we call out exactly what to do and where to find it.

The name “buildah” (line 15) is a built-in ClusterTask (line 16), a task that is built into the OpenShift Pipelines. You can see this and all the other ClusterTasks by running the command tkn clustertask ls. A ClusterTask is available across all namespaces in the OpenShift cluster, while tasks that we have created are limited to the namespace in which they are created.

I’m using buildah to build the image. Since I have the file “Dockerfile” in my source code, this is an excellent choice. I can use the Dockerfile while developing and testing on my local machine, and then when I push the source to the git repo and use it in my pipeline, I can be assured the same build steps and resulting image will be used. I’m in control, and I like that.

How to we know what resources the “buildah” ClusterTask needs? We can run the command tkn clustertask describe buildah to see the details. in the following you can see the input and output resources.

In line 30 we declare a task that we created (creating a Task happens later in this workshop). Notice line 36, which specifies that this task runs only after the task “image-build” is completed.

With that knowledge, let’s create the pipeline:

Command to create the pipeline

After our pipeline builds the image and places it into the OpenShift project’s registry, the only task we need to create in our namespace is the “apply-manifests” task. As good fortune would have it, we don’t even need to create this from scratch. It’s a part of the OpenShift Pipelines catalog, a collection of open source, reusable tasks. The catalog can be found at https://github.com/openshift/pipelines-catalog.

Here is the command to create the “apply-manifests” task:

The “apply-manifests” task will find the YAML files in the git repo’s “k8s” directory and apply them to our application. Knowing this, our source repos will have a “k8s” directory with three manifests: a Deployment Config, a Service, and a Route. You can view these by looking in the source repos:

The files in the “k8s” directory will create a deployment for our application, create a service that points to the deployed pod, and a route that allows you to access the service from outside of your cluster. If these we not created, the pipeline would simply create an imagestream and nothing more. There may be cases where this is desired, such as creating an image and pushing it to a public image registry such as quay.io.

We need to create two resources. The names must match the resources specified in the pipeline: qotd-git and qotd-image.

You can view this by looking inside the following four files:

As you might suspect, each is written in a different programming language; they all give the same results.

You can create a ressource by running the command tkn resource create and following the prompts, but we’re going to use the command line and a YAML file; it’s much more “DevOps”-y.

Choose any of the four qotd-git-* YAML files and create the “qotd-git” resource:

We can view the results by running tkn resource ls

At this point, we have a pipeline, tasks that make up the pipeline, and resources to be used by the build. We can see what we have by running some commands.

tkn task ls to see a list of tasks:

tkn pipleline ls to see a list of pipelines:

Now what we have the name of the pipeline, we can start it. After it is started, the terminal will return the command you will use to watch the progress of the build.

When you are prompted for the resources to use, use the default values.

Use the route in your browser, or run the cURL command in your terminal, to navigate to the results. Refresh your browser several times to see random results.

In this optional step, the git repo location is changed and the pipeline is started. This will result in a different image being run. This change can be observed by running a cURL loop and watching the results.

What we will do is change the value of the Pipeline Resource “qotd-git” to point to a differnet Github repo.

Start by running the cURL command at the command line:

You could choose the oc patch... command to update your qotd-git resource, but instead it’s much easier to simply apply changes from a different YAML file.

Any one of the following commands will work; choose the one that is not the language you are currently using (Go if you’re following this tutorial to the letter):

This will start the pipeline using the new value for the source code Github repo.

After a few minutes you should see the results of your cURL loop change.

This marks the end of this workshop.